Up on the blog today we have the third “not so missing” card on this blog for former catcher Tom Lundstedt, though he did appear on a multi-player rookie card in the 1974 set.
I just came across this nice image of him and figured “why not”?, thus closing out his brief three-year MLB career with three dedicated cards: 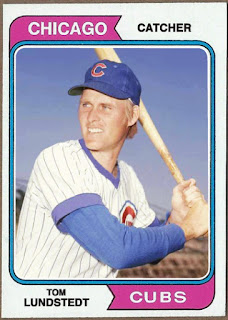 Lundstedt made his Big League debut in 1973 with four games, going 0-5 at the plate over the course of the last month of the season with the Chicago Cubs.
He collected the first three hits of his career in 1974, spread out over 32 at-bats and 22 games with the Cubs for an average of .094 along with a run scored.
Over the off-season he'd be traded to the Minnesota Twins for Mike Adams, and he'd go on to appear in 18 games, batting .107 with another three hits, this time over 28 at-bats, with two runs scored and an RBI while filling in behind the plate.
Turns out it'd be the last of his playing days, Majors OR even Minors, as I cannot find any other playing time for him according to Baseball_Reference after that 1975 activity.
Nevertheless, in his brief three year Major League career, Lundstedt played in 44 games, batting .092 with six hits in 65 at-bats, scoring three runs and driving in one.