Up on the blog today we have a “not so missing” 1971 card for two-game Major League pitcher Ray Peters, who played the entirety of his Big League career in June of 1970: 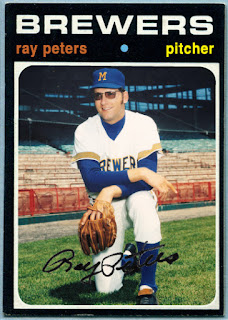 Peters’ two games were not that successful, as he was pounded for seven earned runs over two innings of work, but nevertheless he made it to the “Big Show”, even if it was for only two days.
That performance left him with a career 0-2 record, with an earned run average of 31.50, with five walks and seven hits allowed.
He would spend the 1971 season in the Minors playing for both the Milwaukee and Philadelphia Phillies organizations, but he would retire after that, still only 24 years of age.