Next up in my “Turn Back the Clock” sub-set series is former slugger (and another fellow Brooklyn native) Rocky Colavito, who slammed four home runs on June 10th against the Baltimore Orioles: 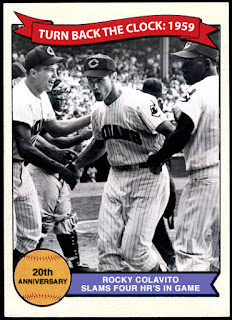 Leading the Indians to an 11-8 win, all Colavito did that day was go 4-4 with four round-trippers, driving in six runs while scoring five himself.
The game would help him take the home run title that season, hitting 42 of them while driving in 111 runs after hitting 41 the previous year.
It’s easy to forget after all these years that Colavito was one of the top all-time home run hitters when he retired after the 1968 season, swatting 374 of them along with 1159 RBI’s and 971 runs scored.
Ironically, right after he led the American League in homers in 1959 he was traded to the Detroit Tigers for batting champ Harvey Kuenn on April 17th of 1960, the only time a batting champ was traded for a home run champ.
He would not disappoint the Detroit fans, averaging just under 35 home runs during his four years in the “Motor City”, including a career high of 45 during the homer-crazy 1961 season.
Posted by John23 at 7:48:00 AM

Email ThisBlogThis!Share to TwitterShare to FacebookShare to Pinterest
Labels: 1959, 1979, Indians, Rocky Colavito, Turn Back The Clock