Here’s a missing 1972 “In-Action” card for former pitcher Milt Pappas, who sadly passed away a couple of months ago: 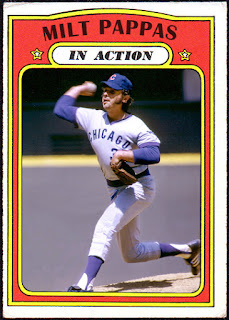 Pappas was in the middle of a career resurgence of sorts in the early 1970’s, as he posted two straight 17-win seasons for the Cubbies after a nice long career that began in 1957 with the Baltimore Orioles.
Oddly enough the 1972 season, his second to last season as a Major League pitcher, could arguably considered his best, when he went 17-7 with a 2.77 earned run average and three shutouts over 29 starts and 10 complete games.
On September 2 of that season he pitched a near perfect game when he no-hit the San Diego Padres, giving up a walk to the 27th batter after having him 2-2, with Pappas fuming that home plate umpire called the last two borderline pitches balls.
Reportedly Pappas was STILL angry about it decades later before he passed.
After being released by the Cubs before the 1974 season he decided to retire, at the young age of only 33 and already winning over 200 games.
He was actually the very first pitcher to win 200+ games without posting a 20-win season (since joined by many).
For his 17-year career Pappas finished with a 209-164 record along with a nice 3.40 ERA and 1728 strikeouts over 520 appearances, 465 of them starts, with 43 shutouts.
Posted by John23 at 7:36:00 AM