The next fantasy coach card in my series is of Yankee legend and Hall of Fame pitcher Whitey Ford, who coached for the Yanks in the mid-70’s: 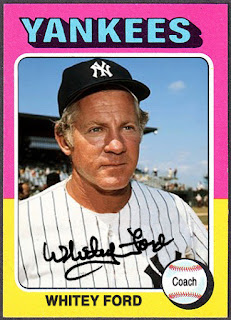 Ford, who was elected to the Hall of Fame in 1974, lent his wisdom as perhaps the greatest Yankee pitcher of them all when he coached right around the time the team was about to become a league powerhouse and “mini-dynasty”.
Considering he was a Cy Young winner, the holder of the highest lifetime winning percentage among 200+ winning pitchers, owner of a 2.75 ERA and winner of 10 games in World Series play, it’s certainly a guy you want teaching young arms in your organization!
The “Chairman of the Board”, the greatest living Yankee!
Posted by John23 at 5:29:00 AM