Here’s a “Dedicated Rookie” for a guy who put together a “baseball life” as a player and manager in the big leagues, Dusty Baker: 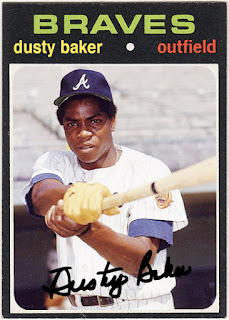 Baker appeared on a nice multi-player rookie card in the 1971 Topps set alongside two other future long-time Major Leaguers, Tom Paciorek and Don Baylor.
But here he is in all his youthful glory, something easy to forget now that he’s been a long-time Major League manager.
Baker actually had a great rookie year in 1972, hitting .321 with 17 home runs and 76 runs batted in.
He’d go on to have a nice 19-year Major League career, hitting 242 homers with 1981 hits, 1013 RBI’s and a .278 average over 7117 at-bats in 2039 games.
When his playing days were over he coached and eventually became a manager himself in 1993, leading the San Francisco Giants for 10 years, culminating in a National League Championship in 2002 before losing to the Angels in the World Series.
From there he moved on to the Chicago Cubs for four years, then the Cincinnati Reds for another six seasons before taking the helm of the Washington Nationals this season.
Over 21 seasons as a manger he has won over 1700 games and counting, and adding to an already 40-year Major League career!
Posted by John23 at 6:14:00 AM