Here’s a “missing” card with an interesting twist: a Don McMahon player card even though he split duties as player AND coach for the San Francisco Giants during the 1973 season: 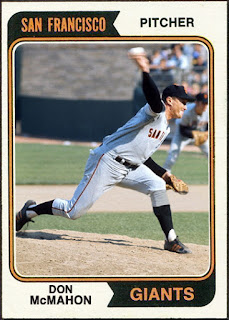 The veteran relief pitcher (and fellow Brooklyn native) lent his experience as a 17-year veteran of the big leagues to the Giants pitching staff, while ALSO going 4-0 with a sparkling 1.48 earned run average in 22 games and 30.1 innings as a 43 year old!
Now how is THAT for showing the youngsters how to do it?!
McMahon put together a grossly underrated 18-year career that saw him appear in 874 games between 1957 and 1974, posting a 90-68 record with a brilliant 2.96 ERA with 152 saves over 1310.2 innings of work.
Year in and year out the man did his job and did it well, suiting up for seven different organizations split between both leagues.
Posted by John23 at 6:09:00 AM