How can I NOT have a coach card for fan-favorite Minnie Minoso, who helped the Chicago White Sox with his wisdom during his 1976 season, even collecting a hit in eight at-bats at the age of 50!?
Well here you go, a nice 1977 compliment to the Topps “Record Breaker” card that was actually in the set: 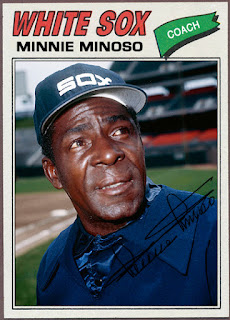 Minoso was a spectacular player that easily gets overlooked because of the “stunts” of 1976 and 1980 which had him officially playing as a 50+ year-old novelty.
The seven-time all-star led the American League in hits once, triples three times and stolen bases another three times, while consistently batting .300+ year in and year out.
A “power-and speed” guy for the era he played in, he finished his 17-year career with 186 home runs and 205 stolen bases along with a .298 average and just under 2000 hits over 1835 games.
He scored 100+ runs in a season five times while driving in over 100 four times, and was ripped off a Rookie of the Year Award in 1951, finishing behind the New York Yankees Gil McDougald (look it up).
Along with three Gold Gloves he also finished fourth in MVP voting four times!
As fun as it was to have the gimmick of him batting later on it really takes attention away from how great he was as a young player back in the “golden age” of baseball.
Posted by John23 at 6:11:00 AM