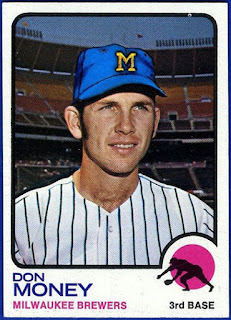 After finding his way over to Milwaukee from the Philadelphia Phillies, Topps had to scramble to get the team right, and here you go!
Money would play out the rest of his 16-year career with the Brewers, getting named to four all-star teams while providing the team with some “pop” and stability in the infield.
Retiring after the 1983 season at the age of 36, he’d finish with a .261 batting average with 1623 hits and 176 home runs over 1720 games and 6215 at-bats, getting a chance at World Series action with the powerful 1982 Brewers team led by guys like Molitor, Yount and Cooper, to name a few.
Posted by John23 at 7:35:00 AM