NICKNAMES OF THE 1970S: "THE DOMINICAN DANDY" JUAN MARICHAL

Time to go and give former San Francisco Giants great Juan Marichal, aka “The Dominican Dandy” a nickname card in my on-going series of great “Nicknames of the 1970’s”: 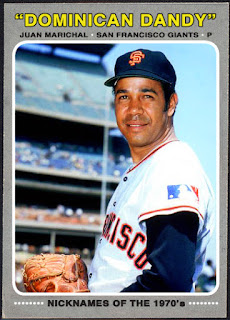 I used the 1970 template since Marichal was coming off of yet another 20-win season in 1969, giving him six such campaigns in seven years!
He would go on to collect 243 wins, 2303 strikeouts, 52 shutouts and a sparkling 2.89 earned run average over 16-seasons, getting named to nine all-star teams.
If it wasn’t for a couple of guys named Koufax and Gibson, we’d be looking at the first 3-time Cy Young winner here.
Nevertheless he would find his way into Cooperstown’s doors in 1983, and rightfully so as one of the greats of the Major League mound.
Posted by John23 at 7:29:00 AM

Email ThisBlogThis!Share to TwitterShare to FacebookShare to Pinterest
Labels: 1970, Giants, Juan Marichal, Nicknames of the 70's