First we had Steve Carlton, then we had Tom Seaver, then they were joined by another future Hall of Famer, Nolan Ryan as pitchers who struck out 19 batters in a nine inning game.
So since I created a “Highlight” card for the first two, here’s Nolan Ryan’s edition: 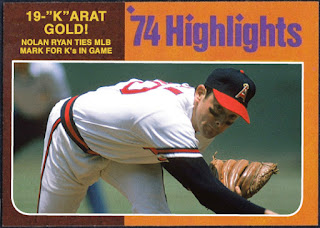 Ryan was absolutely ridiculous at this point in his career, and on August 12th 1974 he faced the Boston Red Sox and proceeded to mow them down one after the other, ending up with 19k’s and creating a three-way tie for the Major League record.
What is truly ridiculous is that Ryan whiffed 19 batters on June 14th of that year, though over 13 innings against the very same Red Sox, and THEN went out and struck out ANOTHER 19 batters barely a week after the nine-inning game, when he chalked up 19 K’s against the Detroit Tigers over 11 innings on August 20th.
Little did we all know that the guy would be throwing this way through the NEXT decade and into the 1990’s, adding more 300-K seasons and a few more no-hitters.
Bionic. The man was just bionic...
Posted by John23 at 5:38:00 AM

Email ThisBlogThis!Share to TwitterShare to FacebookShare to Pinterest
Labels: 1975, Angels, Highlights of the 70's, Nolan Ryan