Although I usually create a new lay-out for a “Traded What-if?” card in this series, today I post my 1974 traded card for grossly underrated (and in my opinion a Hall of Fame caliber) player Vada Pinson in the format Topps released as part of their set: 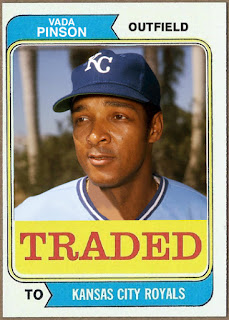 Pinson was traded over to Royals for Barry Raziano and some cash from the California Angels, and he’d finish off his awesome career with two seasons in KC, marking 18-years as a Major League star who just had the bad luck of playing the National League outfield when guys like Mays, Aaron, Clemente and Robinson were there as well, getting all the attention.
But when you look at Pinson’s career, you should be impressed with what he accomplished between 1958 and 1975.
The man could slug the ball, hitting 256 home runs, while also swipe the base, as his 305 steals show. He collected 200+ hits in a season four times while topping .300 four times with a high of .343 in 1961 for the pennant winning Reds.
He led the N.L. in hits, doubles and triples two times each, while also topping the Senior Circuit in runs in his first full season, 1959, with 131.
By the time he completed his career, he topped 2700 hits, 1300 runs, 1100 runs batted in, 250 homers and 300 stolen bases.
To this day it amazes me that guys like Pinson, Al Oliver, Ted Simmons, Steve Garvey, Dave Parker and Jack Morris get snubbed by both the BBWA at first, then the Veteran’s Committee, yet Cooperstown has players like Stonewall Jackson, Chick Hafey, Jesse Haines and “High Pockets” Kelly in there.
Posted by John23 at 6:04:00 AM

Email ThisBlogThis!Share to TwitterShare to FacebookShare to Pinterest
Labels: 1974, Royals, Traded What If, Vada Pinson