On the blog today, how about a "not so missing" 1977 card for former New York Yankee outfielder Kerry Dineen, who appeared in four games over the 1976 season for the American League champs: 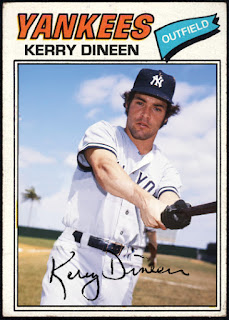 Dineen, who made his MLB debut in 1975 with seven games as a Yankee and hit a scorching .364 in his limited play, came back for those few games in 1976 and hit a respectable .286 with two hits over seven at-bats, including a run batted in and a stolen base.
He would find himself traded to the Philadelphia Phillies just before the 1977 started for Sergio Ferrer and spend the whole year in the Minors, before making it back to the Big Leagues in 1978.
In what turned out to be his last taste of the Majors, he appeared in five games for the Phillies in 1978, hitting .250 with two hits over eight at-bats, spending the rest of the year tearing up Minor League pitching to the tune of a .345 batting average.
Sadly that didn't turn into another Major League shot, as he would play all of 1979 in the Minors, then retiring by year's end. All told, he finished his career with a very nice .324 career average, with 12 hits in 37 at-bats over 16 games between 1975 and 1978.