Up on the blog today we have a career-capping "not so missing" 1974 card for former pitcher Casey Cox, who appeared in one single game for the New York Yankees in 1973, tossing three innings: 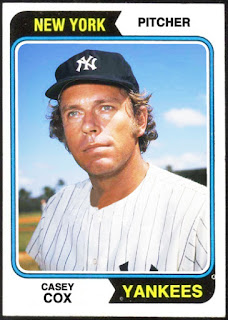 Cox, who made his Major League debut in 1966 with the Washington Senators, didn't factor in a decision in his last Big League appearance, but gave up two earned runs in those three innings, ending up with an ERA of 6.00.
He pitched the first six and a half of his eight MLB seasons for the Washington Senators/Texas Rangers organization, having his best season in 1969 when he posted a record of 12-7 over 52 appearances, with a nice 2.78 ERA over 171.2 innings of work.
Generally a reliever most of his career, in 1970 the Senators made him a starter, appearing in 37 games that year, starting 30 of them.