A nice card to add to the blog today, a career-capping 1976 card for long-time Major League pitcher Orlando Pena, who finished up a nice 14-year career in 1975 with the California Angels: 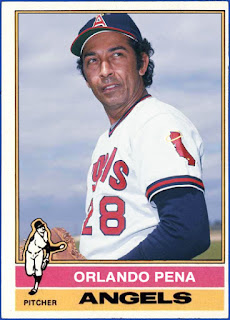 He started his career back in 1958 with the Cincinnati Reds and along the way played for eight teams, with the Kansas City Athletics the team he made the most impact, collecting 30 wins against 44 losses in 100 games between 1962 and 1965.