Up on the blog today we have a 1976 "Career-Capper" for Gary Gentry, former 1969 "Miracle Mets" starter, who finished up his injury-plagued seven year Major League career with seven games for the Atlanta Braves in 1975: 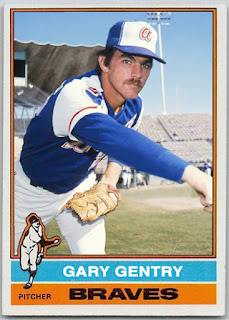 Gentry went 1-1 over his brief final season, with an earned run average of 4.95 in 20 innings of work, with two of the appearances starts.
Still only 28 years of age, he would call it a professional career after the season, ended what was a seven-year career that began with great promise in 1969.
That season, making his Big League debut, he'd post a record of 13-12 over 35 starts, pitching to an ERA of 3.43 with three shutouts as the New York Mets shocked the baseball world by steamrolling to a World Championship, beating the heavily favored Baltimore Orioles.
He would have a decent four-year run with the Mets, winning 13, 9, 12 and seven games respectively between 1969 and 1972 before finding himself with Atlanta in 1973.
But once in Atlanta he couldn't get much playing time, appearing in a total of 26 games over the three seasons, winning a total of five games.
By the time he retired, he finished with a record of 46-49, with an ERA of 3.56 over 157 games and 902.2 innings pitched, with eight shutouts and two saves.