I realized I haven’t created a “Turn Back the Clock” card in a long while, and recently was reminded of Brooklyn Dodger pitcher Karl Spooner’s incredible Big League debut on September 22nd, 1954.
So without further delay, here you go: 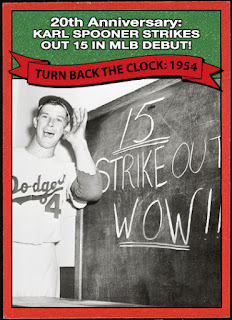 On that September day, Spooner took the mound for the Dodgers a day after the New York Giants clinched the National League title on their way to a World Championship.
All the young lefty would do that day is shut out the Giants on three hits while striking out 15 batters, while walking three, setting a new MLB record for K’s in a debut.
In addition to that, he would also set a new record with six straight strikeouts over the seventh and eighth innings, by now on cruise control as he was heading towards his amazing complete game.
In his very next start, now against the Pittsburgh Pirates, he would again put in an electric performance, striking out 12 batters, a new National League record (one short of Bob Feller’s MLB record of 28 K’s in successive starts), while posting his second straight shutout.
Not too shabby!
The next season Spooner was a highly anticipated rookie who had Dodger fans waiting for magical season, but as we have seen over and over again, the unexpected happened as he was rushed into a Spring Training game to relieve starting pitcher Johnny Podres.
In warming up too fast so as to be ready when the signal came, Spooner later recalls that he entered the game and felt a slight pull on his throwing shoulder.
Though he didn’t think anything of it at the time, by the time his day was over and he was in the dressing room, it got to the point where he couldn’t even put his shirt on.
And just like that, though he did pitch the rest of the season, appearing in 29 games while going 8-6 with a 3.65 earned run average over 98.2 innings, the damage was done, and he never pitched another Major League game again.