For fun today our blog post has a 1977 “not so missing dedicated rookie” card for former pitcher Gary Wheelock, who made his MLB debut during the 1976 season with the California Angels: 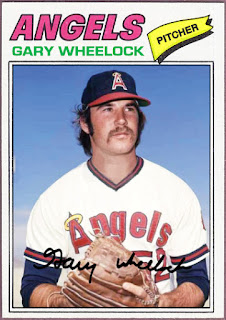 Wheelock actually appeared on a multi-player rookie card in a small airbrushed Seattle Mariners cap, so since I came across this nice image of him with the California Angels, I figured "why not?" and created this version. Wheelock appeared in two games for California as a September call-up, not factoring in a decision while getting hit hard, to the tune of a 27.00 earned run average over two innings,
He would find himself a member of the new Seattle Mariners organization in 1977 and appear in 17 games for his new team, going 6-9 with a 4.89 ERA over 88.1 innings in that inaugural season.
Sadly for him however, he’d spend the next three seasons in the Minors before making it all the way back for one last game in 1980, throwing three innings while giving up two runs, again not factoring in a decision.
After a brief Minor League season for the Los Angeles Dodgers in 1981 where he appeared in nine games, he called it a career, finishing with a record of 6-9 over 20 games, with an ERA of 5.40 in 93.1 innings of work.