Today on the blog we go and add Hall of Famer Phil Niekro to my long-running “Minor League Days” thread, celebrating stars of Major League Baseball around 1971 with a card showing them before they hit the Big Leagues: 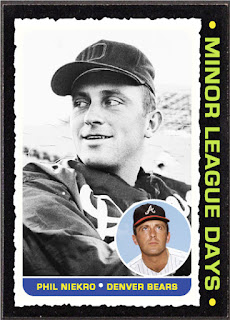 Incredibly enough, Niekro was already a 25-year-old when he put in one season with the Denver Bears in 1964, going 11-5 with a 3.45 earned run average over 29 appearances after spending all of 1963 in the Military.
Later that season he would make his Major League debut with 10 games for the Milwaukee Braves, not factoring in a decisions while sporting an ERA of 3.45 over 15 innings.
It is incredible to think Niekro didn’t have a full season on Big League duty until 1967 at the age of 28, yet still went on to pitch 24 seasons, winning 318 games with a very nice 3.35 ERA along with 45 shutouts and 3342 strikeouts before he was done at the age of 48!
I always thought it amazing that at the age of 44 in 1983, he took home the last of his five Gold Gloves, ALL of which were garnered beginning his age 39 season in 1978.
Ageless!