Today’s blog post offers up a “fix” for a situation that I’m always fascinated about: Topps trying to get the card right, eventually getting shafted with a late-minute transaction.
In this case, Pat Bourque, who was originally shown in the 1975 set as an Oakland A’s player, even though he finished the 1974 season as a Minnesota Twin, and never played Big League ball again: 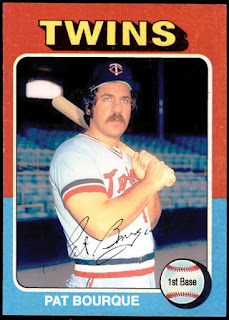 Bourque played the last 23 games of the 1974 season with the Twins after coming over from Oakland, hitting .219 with 14 hits in 64 at-bats, with five runs scored and eight runs batted in.
But after the season ended, he was traded by Minnesota back to Oakland, for whom he started the 1974 season with, but would never appear in a Major League game with.
As a matter of fact, instead of playing baseball in the States again, he took his talents South to Mexico where he played the next four years with the Mexico City Reds before finally retiring after the 1978 season.
Nevertheless, it gives us a unique oddball 1975 card showing him with the A’s, for whom he never played again, and no cards of him as a Twin, which I fixed today.