Came across this great image for former Minnesota Twins all-stars Tony Oliva and Harmon Killebrew circa 1970 and thought it’d make for a great 1971 special, so here goes: 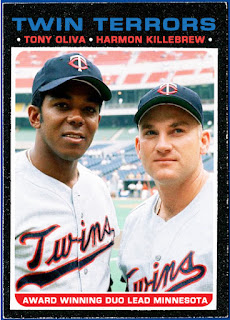 What a great pair of players!
Olive, the three-time batting champion and 1964 American League Rookie of the Year, along with Killebrew, the eight-time American League home run champion and 1969 Most Valuable Player.
A case can also be made that Oliva should have been the 1965 A.L. Most Valuable Player over his teammate Zoilo Versalles (which I happen to agree with), but he had to settle for second place in the voting, which he’d also do in 1970 when he finished behind Baltimore’s Boog Powell for the honor.
Nevertheless, the two studs gave the Twins such a potent double-threat in their line-up for years, and must have been a joy to watch day-in and day-out!
Oliva burst onto the Major League scene in 1964 when he easily won the American League Rookie of the Year award.
In that year, all he did was lead the league in batting, hitting .323, while slamming 32 homers with 94 runs batted in.
He also lead the league in runs scored with 109, hits with 217, doubles with 43 and total bases with 374!
Those numbers also got him a fourth place finish in M.V.P. voting as well.
The following year there was no sign of a sophomore jinx, as he once again lead the lead in batting, this time hitting .321, with 16 homers, 98 R.B.I.'s, 40 doubles and 107 runs scored.
He also lead the league in total hits again, this time with 185.
All told in his career, Oliva would win three batting titles (the third coming in 1971 when he hit .337), and would lead the league in hits five times, slugging once (1971), get named to eight straight all-star teams, and have two second-place finishes for M.V.P., in 1965 and 1970.
I wouldn't say his final numbers warrant a Hall of Fame spot for Oliva. But I'll admit that you can argue a good point for it with the career he left us with.
When you really take a look, he only had 11 full seasons in the Majors, with the half-season in 1976 and three pretty much non-existant years in 1962, 1963 and 1972.
So his numbers carry a bit more weight in that light.
Killebrew?
What does anyone need to be reminded of regarding Killebrew?
He was an absolute BEAST at the plate, crushing 573 lifetime homers, MOST of them during the pitching-era of the 1960's into the '70's.
Eight 40+ home run seasons, nine 100+ runs batted in seasons, seven 100+ base-on-balls seasons, an M.V.P. in 1969 (with five top-5 finishes in M.V.P. voting as well), and a Hall of Fame induction in 1984.
Just awesome!