OK!
Now here is a card I have been meaning to create for years, Hank Aaron’s “base” 1975 All-Star card, which for some reason Topps managed to screw up way back when: 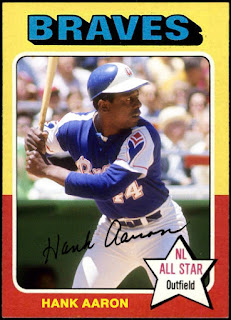 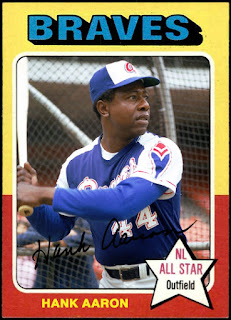 Now, as we know Topps went ahead and made Aaron’s base card an airbrushed Milwaukee Brewer card with his recent trade back to “where it all began” for him.
However, instead of doing what they did with Bobby Murcer, where he’d still have the “All-Star” logo on his base card, they went ahead and put the All-Star on his “Record Breaker” card.
Now, I know a lot of you love the way Topps handled it, but I have always hated it, since I was a kid trying to keep all my All-Star cards together in their yellow and red beautiful glory.
Not that I was really a fan of the Bobby Murcer card with him as a San Francisco Giant yet labeled an American League All-Star outfielder, but at least when paged all together it made sense!
Nevertheless, I created two versions, a posed version and an action version to make the set complete!
Hope you enjoy them!