Up on the blog today we have a “not so missing” 1971 card for one-year Major League pitcher Ed Phillips of the Boston Red Sox: 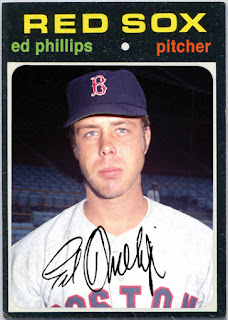 Phillips’ entire Major League career was played between April and August of 1970, appearing in 18 games for Boston while going 0-2 along the way.
In that time he posted an earned run average of 5.32 over 23.2 innings of work, striking out 23 while walking 10, all out of the bullpen.
He would spend all of 1971 in the Boston and New York Mets Minor League systems, appearing in 28 games (??) while tossing only six innings (that’s what Baseball_Reference has listed), to the tune of a 12.00 ERA. Ouch.
That would be the end of his Pro baseball career, which began in Boston’s system in 1966.
Nevertheless, at least for four to five months in 1970 he knew what it was like to be a Major League pitcher!