Fun card to add to the long-running 1971 “Minor League Days” sub-set, a Hoyt Wilhelm edition for the Hall of Fame reliever: 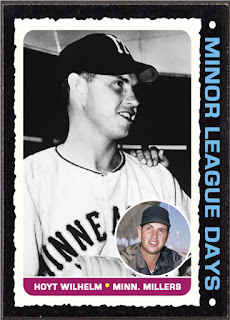 Incredibly, Wilhelm was already 27 years old when this photo was taken when he was a member of the Minneapolis Millers in 1950.
The man STILL had another full year in the Minors before he ever made his major League debut in 1952 when he led the league with a 2.43 earned run average while posting a brilliant 15-3 record over 71 appearances.
Truly one of the unique Big League careers, over his 21 MLB seasons, he only had two where he pitched enough innings to qualify for an ERA title, and he won BOTH years, the other happening in 1959 as a member of the Baltimore Orioles when he paced the league with a 2.19 ERA over 226 innings.
He would really hit his stride AFTER TURNING 40 in 1963 as a member of the Chicago White Sox, when he would post five straight seasons of a sub-2.00 ERA between 1964 and 1968!
As a kid growing up a Yankee fan during the 1970’s and 1980’s, we’d always be reminded of the “last time the Yanks were no-hit” every time a starter was getting close (Moose Haas, Nolan Ryan, etc), which he did on September 20th of 1958.
Before I ever even knew of the incredible career of Wilhelm, I knew of him just for this one fact.
It wasn’t the most memorable of seasons for the future Hall of Famer by any means, as he’d post a combined 3-10 record, though he’d pair that with a great 2.34 ERA, but certainly had one heck of a memorable moment.
Wilhelm would end up pitching 21 seasons in the big leagues, and again keep in mind he didn’t start playing until he was 29 years old!
He finished his brilliant career with a 143-122 record along with a sparkling 2.52 ERA over 1070 games, the first pitcher to reach 1000 appearances, before retiring after the 1972 season at the ripe old age of 49.