Up on the blog today is another do-over, this time a 1975 re-do for former catcher Rick Stelmaszek, who had himself a nifty airbrush job by the fine people at Topps, but is now given a fresh new pic for his card thanks to the gift of passing time: 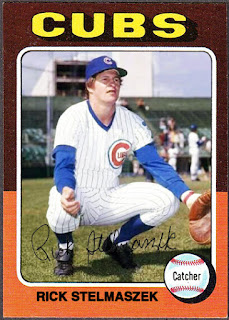 Oddly enough Stelmaszek played for the Chicago Cubs in 1974, appearing in 25 games. It was the only Big League action he saw, so the airbrushed job for 1975 is a bit weird.
For those that don’t remember the original, here you go: 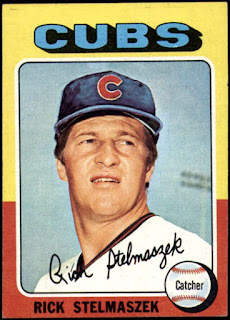 I wonder why Topps didn’t have an image for him WITH the team he actually played for the year prior.
As for his career, after coming up in 1971 for six games with the Senators, Stelmaszek spent the 1972 season In the Minors before making it back to the Big Leagues in 1973, going on to appear in seven games for the now relocated franchise before a trade in May sent him to the Angels.
He’d appear in 22 games for California, one of the MANY catchers the Angels seemed to have at that time, batting .154 for them and a combined .143 between the two organizations.
It was a short-lived tenure with his new team, and he would find himself playing for his hometown Chicago Cubs by the time the 1974 season opened up, playing in 25 games and batting .227 with 10 hits over 56 at-bats while filling in behind the plate.
Those would actually be the last Big League games for Stelmaszek, though he would toil in the Minors for another four years, each year for a different organization, retiring as a player after the 1978 season.
All told, he finished with a .170 batting average, with 15 hits over 88 at-bats in 60 lifetime games, driving in 10 runs while scoring four himself.