Today we add the great Dave Winfield to my 1975 “In-Action” set, as the young stud was quickly becoming a force to be reckoned with in the National League by the time this card would have hit the shelves: 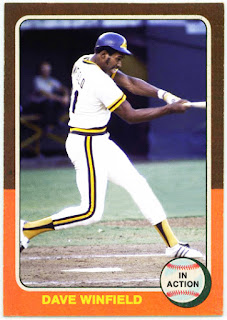 One of my favorite players as a youngster growing up in Brooklyn, NY in the 1980’s, Winfield would become the favorite player of many young kids in the San Diego area during the 1970’s, giving the Padres a new-look outfielder, bringing a whole new type of athleticism (along with Dave Parker of the Pittsburgh Pirates), with speed, stellar defense, a gun for an arm, and power at the plate.
By the time he retired after the 1995 season, his 22nd as a Big Leaguer, he finished with eight 100-RBI seasons, 15 20-home run seasons, 3110 hits, 1669 runs scored and 1833 RBIs.
He made the All-Star team 12 times, took home seven Gold Gloves, finished Top-10 in MVP voting seven times and was awarded six Silver Slugger Awards.
Man I loved this guy! I’ll never forget his line-drive home runs deep into left field at Yankee stadium as a kid, wondering what he would do in a stadium like today where he wasn’t looking at 430 to left-center.
One of the game’s greatest all-around athletes!