Time to go and give long-time Major League catcher Rick Dempsey a “not so missing” 1971 card after appearing in five games for the Minnesota Twins during the 1970 season: 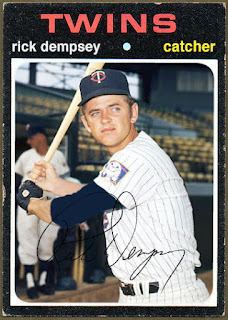 Dempsey was still only 20 years old when he made it to the Big Leagues for the second season in a row, making his MLB debut as a teen in 1969 for the West champion Twins.
Over his five games in 1970 he went 0-7 at the plate, scoring a run, this after going 3-for-6 at the plate in 1969 for a cool .500 batting average.
Of course, we know know that he would go on to play in four decades, playing 24 years between 1969 and 1992, mainly for the Baltimore Orioles, as well as short stints with the New York Yankees, Twins, Los Angeles Dodgers, Cleveland Indians and Milwaukee Brewers.
Never a full-time player, he was an important platoon or “off the bench” catcher that would be a part of two World Championship teams (1983 Orioles and 1988 Dodgers), even taking home the 1983 World Series MVP when he hit .385 for Baltimore in their win over the Philadelphia Phillies.
By the time he retired, he ended up with a career .233 average, with 1093 hits in 4692 at-bats over 1765 games, while also being a huge jokester cracking fans up along the way.
I’ll always remember his rain-delay act with over-stuffed uniform as he “slip and slid” across the tarp while with the Orioles some time during the early-80’s.
Great career and character.