Up on the blog today, a “not so missing” 1977 card for two-year Major leaguer Andy Merchant of the Boston Red Sox, who played the last of his brief Big League career in 1976: 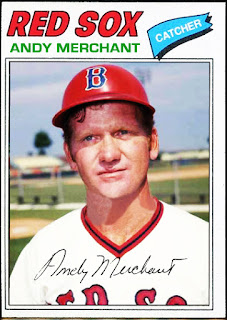 Merchant, who was originally up to the Majors in 1975 for one single game, was back in 1976, this time for two games, completing what was to be a brief three game career.
Over his three Major League games, the catcher hit .333 with two hits over six at-bats, scoring a run while drawing one base on balls.
He would go on to play another three full seasons in Boston’s Minor League system before calling it a career, which began back in 1972 as a 21-year-old.
He played his entire professional career in the Boston organization, never really playing full-time it seems, with a career high 119 games in the Minors in the 1975 season.