JUST FOR THE FUN OF IT: ON CARD ALL-STARS- 1970 JOHNNY BENCH

OK. Now today I start what I hope grows on me, a full set of 1970 cards with on-card All-Star designations, like my favorite cards between 1975 and 1981.We will begin this new thread with all-time great Johnny Bench, who of course was the National League starting catcher for the 1969 game: 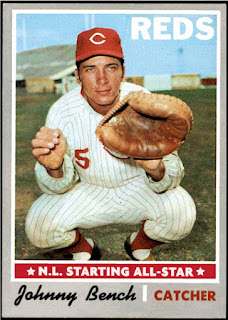 Now, to begin with, if you recall Topps ended up producing All-Star cards in the 1970 that were actually the "Sporting News" All-Stars, not necessarily the starters from the game, so there will be some cool players getting their rightful All-Star call-out after all these years.
Now for the design: I weighed everything Topps did for this set and figured they wouldn't have done much to call-our an All-Star with this design, so I played it safe with a banner running across the bottom somewhat like the 1977 set.
Not a design that reaches out and grabs you by the throat, but just a little something extra to draw your eyes to an All-Star player.
Now as for Mr. Bench, the young rising star was already entrenched as the catcher of the era, making his second straight All-Star team in just his second season.
All he would go on to do in his career is win the National League Rookie of the Year as a 20-year old in 1968, win TWO Most Valuable Player Awards by the age of 24, and win a couple of championships by the age of 28.
Oh yeah, he'd also end up being what most consider the greatest catcher the game has ever seen!
Just an incredible career that took him straight to the Hall of Fame in his first year of eligibility in 1989, as if there was any chance of that NOT happening!
All-time legend of the game.