Fun card to add to the “wthballs” collection, a 1976 “not so missing” card for 15-year MLB catcher Ernie Whitt, who made his Big League debut in 1975 as a member of the American League champion Boston Red Sox: 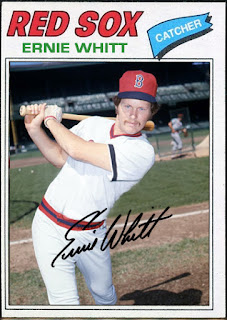 Whitt only played in eight games with the Sox before being selected by the Toronto Blue Jays with the 34th pick in the Expansion Draft.
Over those eight games he hit .222 with four hits over 18 at-bats, including two doubles and a homer, while driving in three and scoring four.
After two seasons of very little play in 1977 and 1978, he spent all of 1979 in the Minor Leagues for Toronto before coming back for good in 1980, playing in 106 games and on his way to a very nice career, the next 10 with the Blue Jays.
He was their regular catcher over that time, even making the All-Star team in 1985, and I’ll always remember him hitting three home runs in the record breaking game where the Blue Jays hit 10 taters in a single game.
He would play his last two years of 1990 and 1991 with the Atlanta Braves and Baltimore Orioles respectively, before retiring at the age of 39, finishing up with a .249 average with 134 homers and 534 runs batted in over 1328 games and 3774 at-bats.
Posted by Giovanni Balistreri/ WTHBALLS at 5:32:00 AM