Been meaning to add this “nickname” card to the long-running thread for some time now, a “Bull” Bob Watson edition for the All-Star first baseman, and future co-architect of the New York Yankees dynasty teams of the late-1990’s/early-00’s: 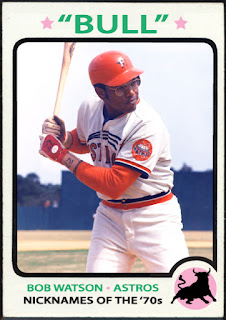 Watson was in the prime of his career when this card would have come out, putting in consistent seasons year in and year out for the Houston Astros, with whom he came up with back in 1966 as a 20-year-old.
After 14 seasons in the Houston sun (under a dome), he’d move on to the Boston Red Sox for half a year in 1979, then on to the Yankees, where I got to see him play for two-and-a-half-years until he moved on to the Atlanta Braves for the last 2+ years of his 19-year career.
He’d finish with a very nice .295 career average, with 184 homers and 989 runs batted in, while collecting 1826 hits with two All-Star nods.
Later on, he moved into coaching and then became GM of the Yankees in 1993, helping the team draft wisely, refrain from dumb trades (ala George Steinbrenner), helping the team build up their young core that would lead to World Series titles in 1996, 1998-2000.
Truly a baseball lifer and underrated player in my book.
Posted by Giovanni Balistreri/ WTHBALLS at 6:35:00 AM

Email ThisBlogThis!Share to TwitterShare to FacebookShare to Pinterest
Labels: 1973, Astros, Bob Watson, Nicknames of the 70's