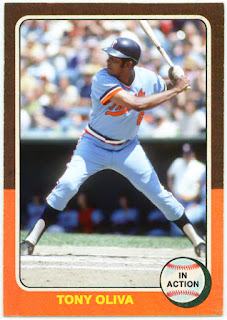 Oliva was coming towards the end of his great career by the time this card would have come out, but was still a solid hitter who hit .291 and .285 the previous two seasons.
He’d hit ..270 in his last full season, 1975, before falling to only .211 in 1976, which turned out to be his last, all with the Minnesota Twins, with whom he first came up in 1962.
Of course, in between, all he would do is have one of the greatest rookie seasons in 1964, easily taking home the top rookie honor in the AL while finishing up fourth in the MVP race, finish second in the MVP race the following season when he helped guide the Twins to their first World Series appearance (though many including myself feel he was robbed of the award, ironically by his own teammate Zoilo Versalles), and lead the league in hits five times, batting three times, doubles four times, while topping .300 seven times.
He was an All-Star eight times while garnering MVP attention eight straight seasons, with three top-5 finishes, and if it wasn’t for injuries we’d be talking about a 3000-hit player with more than three batting titles.
What a great player that gets lost in the shuffle of the glory days of 1960 among legendary names like Aaron, Mantle, Mays and Clemente.
Posted by Giovanni Balistreri/ WTHBALLS at 5:34:00 AM