Time to whip up another of my favorite templates to use, a 1976 “traded” card, moving away from the style used by Topps in what is my all-time favorite set, this one for Cy Young winning relief pitcher and record-setter Mike Marshall: 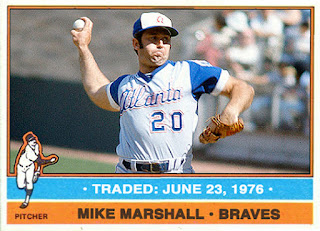 Just two seasons from his historical season of 1974 when he took home baseball’s top pitching prize, setting the (still) MLB record of appearing in 106 games for the National League champion Los Angeles Dodgers, Marshall was traded to the Atlanta Braves on June 23 for Lee Lacy and Elias Sosa.
Turns out it was a lopsided trade in favor of the Dodgers since Marshall never really got anything going during his two half-seasons there, before getting traded to the Texas Rangers for the rest of the 1977 season.
Once he moved on to the Minnesota Twins in 1978 however, he found his groove again, putting in two seasons of Cy Young caliber relief work again, saving 53 games and appearing in 144 games between 1978 and 1979.
In 1980 his career took a steep downturn, appearing in only 18 games while posting an ERA of 6.12 before he moved on to the New York Mets for a year in 1981, having a nice year where he went 3-2 with a 2.61 ERA at the age of 38.
Of course, we’ll all remember that 1974 season when he went 15-12, with an astounding 208.1 innings pitched and 21 saves and an ERA at 2.42, ALL out of the bullpen for the Dodgers, setting records for appearances and consecutive games pitched with 13.
Thanks to Marshall’s medical background, having multiple degrees in medicine, he’s also remembered for allegedly being the person suggesting to teammate Tommy John to undergo this radically new surgery when Tommy John’s career was seemingly over.
Of course, John did so and eventually the surgery would end up being so associated with him that it took on his name, “Tommy John Surgery”.
Posted by Giovanni Balistreri/ WTHBALLS at 7:02:00 AM

Email ThisBlogThis!Share to TwitterShare to FacebookShare to Pinterest
Labels: 1976, Braves, Mike Marshall, Traded What If