Next up in my long-running “1975 In-Action” series is New York Yankees All-Star third baseman Graig Nettles, one of my childhood favorites: 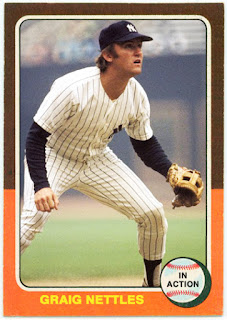 Nettles came over to the Yanks from the Cleveland Indians before the 1973 season and did nothing but perform, helping them head straight to three straight American League Pennants and two World Championships by the end of 1978.
Along the way he also led the A.L. with 32 homers in 1976, then following that up with a career-high 37 in 1977, while also taking home two Gold Gloves and getting named to five All-Star teams.
Of course, the man was also known for his stellar glove work, especially in the Fall Classic when he put on a clinic against the Los Angeles Dodgers during Game 3 in 1978, helping the Yanks win the game and swing the series momentum.
A master a quips as well, I’ll always remember “You went from Cy Young to Sayonara”, which he stated to Cy Young winning reliever Sparky Lyle after the Yankees acquired Rich Gossage, as well as "[w]hen I was a little boy, I wanted to be a baseball player and join the circus. With the Yankees I have accomplished both”, about his time in the Bronx.
When it was all said and done, Nettles played for 22 seasons, finishing up with 390 homers, 2225 hits, and 1314 runs batted in, with 1193 runs scored and a reputation that still has him considered one of the finest defensive third basemen in history.
Posted by Giovanni Balistreri/ WTHBALLS at 6:51:00 AM