Here’s a fun card to create and add to the “wthballs” stable, a “not so missing” 1974 card for one of the Cruz brothers, Tommy, who played all of seven games during his brief MLB career: 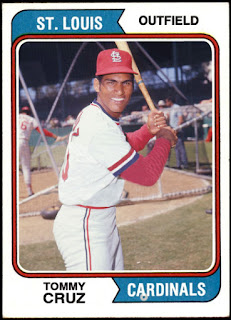 Cruz made his Big League debut in 1973 with the St. Louis Cardinals, playing in only three games while not getting a plate appearance.
He appeared in one game out in left field while also pinch running, leading to a run scored during his first taste of the Big Leagues.
He’d go on to play four years in the Minor Leagues between 1974 and 1977 before making it back to a Major League game in 1977, now as a member of the Chicago White Sox, appearing in four games and going 0-2 at the plate while again scoring one run.
Sadly for him however that would be it for his MLB career, as he’d go on to play the 1978 and 1979 seasons in the New York Yankee organization, putting in good years averaging over .300 combined.
But it never got him another shot on the Big League level, finishing with those seven appearances and an 0-2 showing with two runs at the plate.

Posted by Giovanni Balistreri/ WTHBALLS at 6:17:00 AM