On the blog today we have a “not so missing” 1974 card for former pinch-runner Matt Alexander, who managed to swipe 103 bases during his nine-year MLB career while only collecting 36 hits: 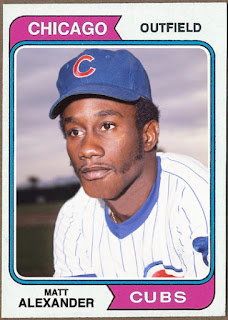 Alexander played in the first 12 games of his Major League career during the 1973 season as a member of the Chicago Cubs, hitting an even .200 with one hit over five at-bats while scoring four runs and stealing two bases.
After getting traded to the Oakland A’s for Minor Leaguer Buddy Copeland in April of 1975, he’d go on to average about 20 steals a season over the next three years, occasionally playing the field while collecting only 12 hits combined.
Much like the more famous “designated runners” Herb Washington and Larry Lintz, was a speedster who found his niche (though I’m sure he would have rather have just PLAYED than pinch-run), playing out his nine-year MLB career with four seasons with the Pittsburgh Pirates, including the World Champion 1979 edition, when he appeared in 44 games, hitting .538 with seven hits over 13 at-bats, with 16 runs scored and 13 steals.
Overall, after retiring in 1981, Alexander finished with a .214 career average, with 111 runs scored on 36 hits, with 103 steals over 374 games and 168 at-bats.
As a quirk in MLB history, he is one of only seven players (excluding pitchers) to have played at least 100 games and have more games played than at-bats.
Posted by Giovanni Balistreri/ WTHBALLS at 5:29:00 AM