Today we take a look at the airbrushed image used for the 1973 Gary Gentry card after the former pitcher found himself traded from the New York Mets to the Atlanta Braves in November of 1972: 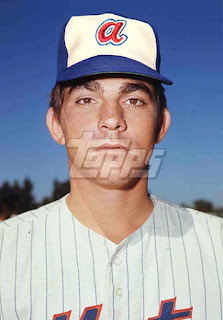 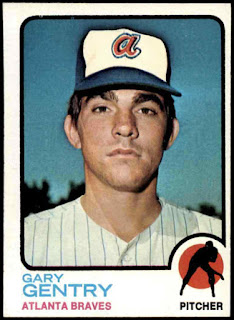 Gentry, a mainstay of the Mets starting rotation since the 1969 World Champion team, was traded to Atlanta with Danny Frisella for Felix Milan and George Stone on November 3rd of 1972.
That forced Topps to get to work on an airbrushed image, shown here, to reflect his new digs.
Sadly for the Braves, Gentry’s best days were behind him, as he’d never win more than four games in a season over the next three years before retiring after 1975.
With the Mets between 1969 and 1972, he averaged about 10 wins and 200 innings pitched, tossing eight shutouts while completing 22 games, good numbers for a guy who was in a rotation with the likes of Tom Seaver, Jerry Koosman and Jon Matlack.
After just seven appearances in 1975, which saw him go 1-1 with a 4.95 ERA over 20 innings pitched, he called it a career, finishing up with a record of 46-49, with a 3.56 ERA over 157 appearances and 902.2 innings pitched.
Posted by Giovanni Balistreri/ WTHBALLS at 7:19:00 AM