Here was a fun card to create, a 1975 “not so missing” edition for seven-game Major Leaguer Glenn Redmon of the San Francisco Giants: 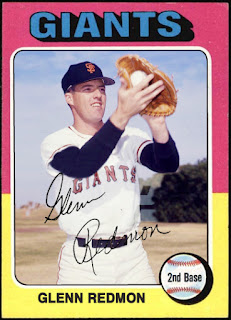 Redmon’s Big League career spanned a late-season September call-up in 1974, hitting .235 over those seven games, with three doubles among his four career safeties with four runs batted in in 17 at-bats. Not bad!
A decent hitting infielder with no power over his eight years as a professional in the Minor Leagues, he played for the White Sox, Giants and Indians organizations before retiring after the 1976 season, never getting that chance to suit up in a Big League game again aside from that wonderful month in late-1974.
Posted by Giovanni Balistreri/ WTHBALLS at 6:36:00 AM