Time to add a "not so missing" 1975 card for former Major League infielder Rich McKinney to the WTHBALLS stable, the third creation here over the years for the guy: 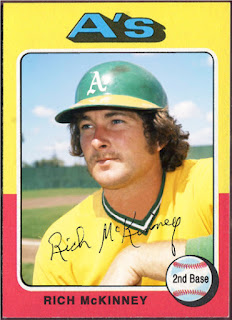 McKinney appeared in only five games for the three-time World Champs in 1974, his second year with the team, going 1-for-7 at the plate while putting in time at second base on the defensive side.
He would go on to appear in only 8 combined games in 1975 before spending all of 1976 in the Minors, but would come back in 1977 to play in 86 games for Oakland, which turned out to be the last Big League action of his seven-year career.
When it was all said and done, McKinney finished with a .225 batting average, with 199 hits in 886 at-bats over 341 games, with 20 homers and exactly 100 runs batted in and 79 runs scored.
Of course we’ll also remember that McKinney got two straight classic airbrush jobs on his Topps cards in 1972 and 1973, which I profiled years ago on the blog: