Next up in my on-going thread of "expanded league leaders_ is my 1974 American League Home Run card, celebrating the top three home run hitters in the Junior Circuit for 1973: 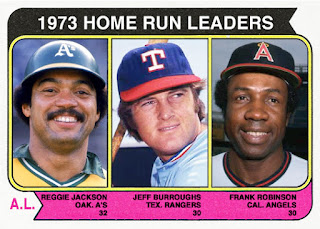 Of course we begin with the A.L. MVP for that year, Reggie Jackson, who took home the first of his four career home run titles with his 32 blasts for the eventual World Series champion Oakland A's.
He would also lead the league with 117 RBIs, 99 runs scored and .531 slugging percentage, while making his fourth All-Star team in five years.
Right behind him with 30 home runs would be former overall #1 draft pick Jeff Burroughs, who had a very nice breakout year as a 22-year-old for the Texas Rangers.
It was his first full season in the Big Leagues after parts of three seasons for the Washington Senators/Texas Rangers between 1970 and 1972.
In addition to his 30 "jacks", Burroughs drove in 85 runs and hit .279, somewhat of a precursor to his MVP 1974 season.
Tied with Burroughs for second place in homers for 1973, none other than the great (and grossly underrated) all-timer Frank Robinson, who made the most of the new opportunity as a Designated Hitter for the California Angels, reaching 30+ homers for the first time since 1969 while driving in 97 and scoring 85.
It would be Robinson's final standout season before transitioning to MLB manager with the Cleveland Indians two seasons later.
The top three home run hitters in the American League in 1973, rightfully celebrated here on this expanded leader card.
Such a fun thread to work on!
Posted by John23 at 6:58:00 AM