Here's a fun card to throw out there, a re-do for Doc Medich and his 1978 Topps card, showing him with a team he pitched for in 1977 instead of the airbrush classic that we all pulled out of packs in the Spring of 1978: 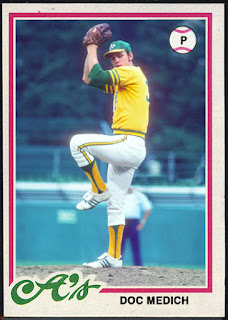 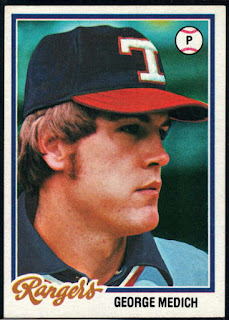 Medich didn't finish the year with the Oakland A's, but since I cannot find a suitable image of him with the New York Mets, the team he DID finish the year with, I used this nice action shot instead.
Medich opened the season with Oakland, pitching well by going 10-6 for them over 26 appearances, all but one of those starts.
He was then sent to the Seattle Mariners where he appeared in only three games before finding himself out East with the Mets, where he appeared in one single game, throwing seven innings, closing out an active if not eventful year.
A solid starter over his 11 year career, he came up with the New York Yankees, winning as many as 19 games in 1974 before getting traded to the Pittsburgh Pirates in the Willie Randolph deal, then the three 1977 clubs mentioned above, then the Texas Rangers where he pitched between 1978 and 1982, finally closing out his career with 10 starts at the end of '82 with the Milwaukee Brewers.
By the time he hung them up, he finished with a record of 124-105 over 312 appearances, with a 3.78 ERA and 16 shutouts in 1996.2 innings, with 955 strikeouts against 624 walks.
Posted by John23 at 5:25:00 AM