Capping off yet another week here on the blog, today we have the next card in my "expanded league leaders" thread, a 1974 N.L. Stolen base leader card, featuring the top three stolen base guys from the Senior Circuit for 1973: 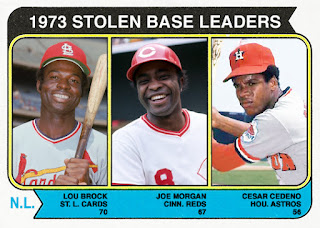 Of course we begin with Hall of Famer Lou Brock. Who Else?
Brock paced the N.L. in 1973 with 70 steals, the seventh time he'd lead the league and of course a precursor to his historic 1974 season that saw him break the Major League record with 118 steals, which would hold up until a dude by the name of Rickey Henderson showed up.
For Brock, his 1973 was a "typical" Brock season: 190+ hits, 100 runs scored and hovering around .300 for the St. Louis Cardinals. The man was a machine!
Just behind him with 67 steals is another Hall of Famer, Joe Morgan of the Cincinnati Reds, who was by now churning out MVP-type seasons left and right.
Morgan's 67 steals would end up being a career-best, a number he'd match two seasons later during his first MVP year of 1975.
He paired those steals with 116 runs scored, a .290 average, 26 homers and 82 RBIs, helping the Reds to the National League playoffs before a surprising loss to the New York Mets.
In third place for stolen bases in 1973, Houston Astros stud Cesar Cedeno, was in the prime of his Major League career, stealing 56 bases, one more than his previous season's total.
With those 56 steals he also hit 25 homers with 70 RBIs, scoring 86 runs and matching his 1972 batting average of .320.
He also brought home his second straight Gold Glove, with three more to follow consecutively through the 1976 campaign.
Three great N.L. talents on one smart card here!
Onto the American League next week!
Posted by John23 at 6:21:00 AM