On the blog today, we move ahead in my long-running "expanded league leaders" thread where we celebrate the top 3 men in a particular statistic in years where Topps just had the first place finisher of both leagues on one card. 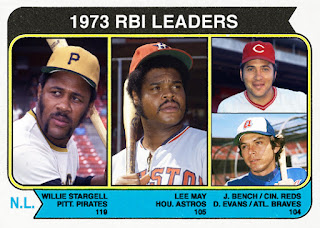 Starting off, we have the great Willie Stargell, who paced the National League with his 119 run batted in during the 1973 season, the only time he led the league in RBIs over his career.
He also led the league with 43 doubles and 44 homers, as well as slugging percentage, good for a second place finish in the MVP race and a sixth All-Star nod.
In second place with 105 RBIs was the "Big Bopper", Lee May of the Houston Astros, who had what was a typical year for himself with 28 home runs and a .270 batting average in his second season in Houston after coming over from the Cincinnati Reds in the blockbuster Joe Morgan deal.
May was really a forgotten stud from the era, and it is a shame considering his consistency with 20+ homers and 90+ RBIs over a decade.
Tied at third place with 104 RBIs are Johnny Bench and Darrell Evans, who both had great years in 1973.
For Bench, it was "business as usual", as he'd reach 100 RBIs for the third time in four seasons, and something he would do six times in his career.
The man was in his prime and would go on to be considered the greatest catcher the game has ever seen, and justifiably so.
For Evans, 1973 was a breakout year for him, hitting 41 homers and reaching the 100 RBI mark for what turned out to be the only time in his career.
Though he'd never reach 100 RBIs again, he would certainly put in a Hall of Fame worthy career, finishing up with 414 home runs, 2223 hits, 1354 RBIs and 1344 runs scored, as well as a .361 OBP in 21 seasons.
There you have it! The top 3 RBI men in the National League for 1973 on a 1974 "expanded league leader card".
Onto the American League!
Posted by John23 at 6:41:00 AM