On the blog today we have a fun card to add to the "WTHBALLS" stable, a "not so missing" 1972 card for one-year Big League pitcher Bob Kaiser, he of five games in 1971 for the Cleveland Indians: 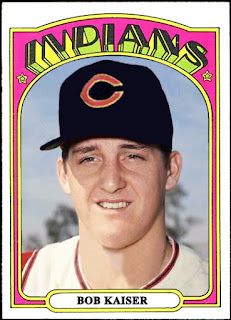 Kaiser threw five innings in his only taste of the Majors as a 21-year-old, not factoring in a decision while striking out four, walking three, and allowing three runs for a 4.50 earned run average.
He would put in another four seasons in Minor League ball, the last of which was in the Detroit system in 1979 with a gap from 1974 till then, but never get another shot in the Big Leagues again, finishing up with just those five games in 1971.
Posted by John23 at 5:52:00 AM