On the blog to close out another week, we have an expanded league-leader card in the 1974 set celebrating the top-3 home run hitters in the National League for 1973: 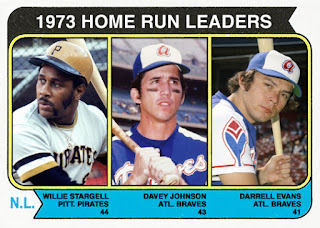 The top dog in this home run race, Pittsburgh Pirates Hall of Fame slugger Willie Stargell, who led the league for the second time in three seasons when he hit 44 dingers to go along with his league-leading 119 run batted in.
It was also the second time in three seasons the man finished runner-up to the MVP Award, with a THIRD place finish in between for 1972.
It was just an amazing run of success that I really feel people have forgotten over time, as is the case with Billy Williams of the Chicago Cubs.
Not only was Stargell a slugging machine, but in each of those three seasons between 1971 and 1973, he never hit lower than .293, while also leading the league with 43 doubles in 1973.
Right behind him with 43 home runs we have perhaps the biggest anomaly in baseball history, Davey Johnson of the Atlanta Braves, who went from a career-best of 18 home runs in 1971 to this ridiculous total just two years later.
Johnson's 1973 season is incredible. Over his 13 year career he never hit more than those 18 homers while with the Baltimore Orioles, of course except for those 43 in 1973 in his first season with Atlanta.
Thing is, the following year he was right back to where he was before, hitting 15 and never reaching double-digits again in his Big League tenure.
Even when he went over to Japan in 1975 and 1976, the most he hit was 26, with 13 the other season.
Just what on earth was it that year?
The Braves definitely had a groove going on that year, as they became the first team in MLB history to have THREE hitters reach 40 homers, with the great Hank Aaron and Darrell Evans teaming up with Johnson to give them a trio never before seen in the game.
Which of course brings us to the third place home run hitter in the N.L., Johnson's teammate Darrell Evans, who legitimately was a slugger in the Majors, and had his "coming out party" of sorts that year with his 41 blasts.
For Evans, the writing was on the wall for what was to come over his brilliant 21 year Big League career.
In just his second full year of Major League ball, Evans produced, hitting 41 homers while driving in was ended up being a career-best 104 runs while leading the league with 124 base on balls, also hitting a career-high .281 over 161 games.
Of course, we all know that incredibly enough 12 years later, at the age of 28, he would become the first batter to hit 40 or more homers in a season in both leagues, when he led the A.L. in 1985 with 40 homers, on his way to a career 414 before retiring after the 1989 campaign.
There it is! The Senior Curcuit's top-3 sluggers for 1973.
Now we move on to the A.L., see you then!