Today we start a fun new thread, celebrating one of the greatest All-Star games, the 1971 Midsummer Classic, with a special 1972 All-Star subset, beginning with the National League catcher, Johnny Bench of course: 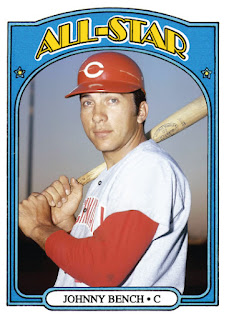 It's a shame Topps didn't include All-Star cards in their classic 1972 set, whether it be on-base All-Star banner or a separate sub-set (I prefer on-base-card), being that the 1971 All-Star game is still arguably the greatest ever played.
With the combination of aging all-time greats like Mays, Aaron, Clemente and up-and-comers like Bench, Jackson, Blue, combined with the era of American society transitioning to a more "modern" era, it was incredibly significant in more ways than just "sports".
So we begin with Bench, who by then was already entrenched as the premier catcher in baseball, and an All-Star constant through the rest of the decade.
I'll be creating and posting the starters of that game over the next few months, starting with the National League, before perhaps creating cards for the non-starters, who happen to be some big-time names.
I also plan on having this as a special printed set in the future, some time in 2022!
Enjoy!