Thought I'd start creating some "dedicated" manager cards through the decade for the years Topps didn't create any, since so many of these guys were iconic figures in the game during some great years.

Today we'll begin with Sparky Anderson and a 1977 edition, since he was on top of the baseball world when this card would have seen the light of day: 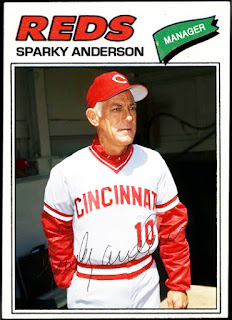 Anderson, who was disturbingly ONLY 42 years of age when this photo was taken, was coming off his second straight World Series championship in 1977, and at that point it really looked like we were about to witness one of the all-time great dynasties.
In 1975 the Reds were arguably one of the best teams in baseball history, steamrolling to 108 victories before eventually beating the Boston Red Sox in the World Series.
In 1976, more of the same as the team would win 102 games before sweeping the New York Yankees in the World Series.
Throw in the fact that they were also in the World Series in both 1970 and 1972, and it really looked like the team, stacked with guys like Johnny Bench, Pete Rose, Joe Morgan and George Foster, would be keeping our attention for quite some time.
But alas, according to Sparky, it was the trading of one of their OTHER stars, Tony Perez, that took the heart and soul out of the team, and shockingly the "Big Red Machine" would not bring home another championship, and the franchise would have to wait until 1990 before experiencing it again.
For Anderson however, the man would go down as one of the greatest managers in Major League history, moving on to the Detroit Tigers in 1979, where he would go on to manage 17 years, giving him a combined 26 years of Big League managing, even taking home another title with that great 1984 Tiger team that was in first "wire-to-wire", winning 104 games before beating the San Diego Padres in the World Series.
All told the man won 2194 games as a manager, finishing with a .545 winning percentage, three titles, 5 pennants, and of course a Hall of Fame induction in 2000.
Legend, and perpetually looking like an "old man" even when he was in his 30's!