Time to go and give one of my favorite baseball personalities, Billy Martin, a "dedicated manager card" in my new thread, this one a 1975 edition: 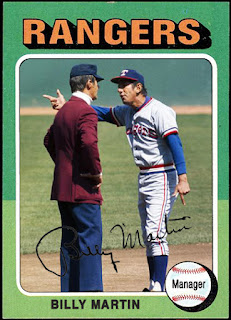 Martin was a winner wherever he managed. Just look it up!
He began his managerial career in 1969 with the Minnesota Twins and took them straight to the Playoffs, guiding the team to a first place finish with a 97-65 record.
He would move on to Detroit, and would take them to a first place finish by his second year in 1972 with a record of 86-70.
He’d move on to the Texas Rangers and they’d have their first successful season in 1974, albeit a second place finish behind league MVP Jeff Burroughs and ace Fergie Jenkins, then of course he would move on to the New York Yankees, where the “Bronx Zoo” was in full swing, eventually bringing Martin a World Championship in 1977.
He’d move on to the Oakland A’s where “Billy-Ball” was in full effect, losing to the Yankees in the Championship Series while burning through every arm on his pitching staff with overuse.
Then finally, there was the back-and-forth period between he and the Yankees, specifically owner George Steinbrenner, where he managed in 1983, 1985 and finally 1988, almost a comedic show of hiring and firing that really was an embarrassment to us Yankee fans of the era.
Nevertheless, Martin was a winner, though one with a temper at that, leaving the game with a .553 winning percentage and over 1200 wins.
Should he be in the Hall of Fame?
I do think so more for his personality than anything else. As a symbol of the wild 1970’s with his managerial style a'la Earl Weaver, arguing and fighting his way through each season.
Rest in Peace Billy, you are missed.
Posted by John23 at 5:38:00 AM