Today’s blog post has a “not so missing” 1972 card for former pitcher Chuck Seelbach, who put in parts of four seasons in the Big Leagues, all with the Detroit Tigers, including one “full-time” season that was actually very good: 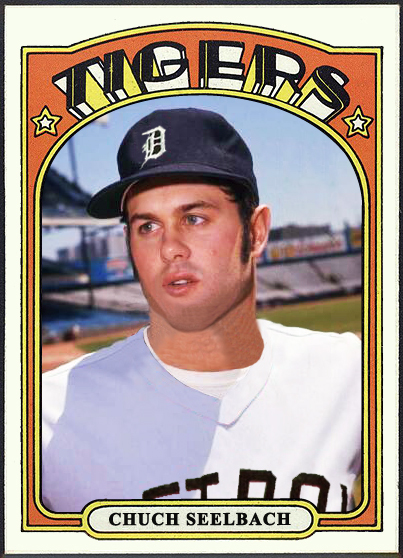 I’ve always found his brief career interesting, as Seelbach broke into the Majors in 1971 with five appearances, all out of the pen, not factoring in a decision while posting a gaudy 13.50 earned run average over four innings.
In 1972, with Detroit fighting for a playoff spot, Seelbach put in the year of his career, going 9-8 over 61 games, all but three out of the bullpen, with a very nice 2.89 earned run average and 14 saves over 112 innings of work, with 76 strikeouts against 39 walks.
As a matter of fact Seelbach was on the mound when the Tigers clinched the American League East championship on October 3, 1972.
He set down the Boston Red Sox in order in the 9th inning to clinch the AL East title, as the game ended on a Ben Oglivie  fly ball caught by Al Kaline in right field.
Sadly for him however, shoulder injuries soon followed resulting in 1973 and 1974 having him appear in only nine combined games, going 1-0 with an ERA around 4.00 over just 14.2 innings.
And just like that his Big League career was over.
His four years as a pitcher resulted in a career 10-8 record, with a 3.38 ERA over 75 games, with 14 saves and 130.2 innings pitched.