Up on the blog today we have a 1971 “not so missing” card for former player (and future manager) John Vukovich, who made his MLB debut during the 1970 season with the Philadelphia Phillies: 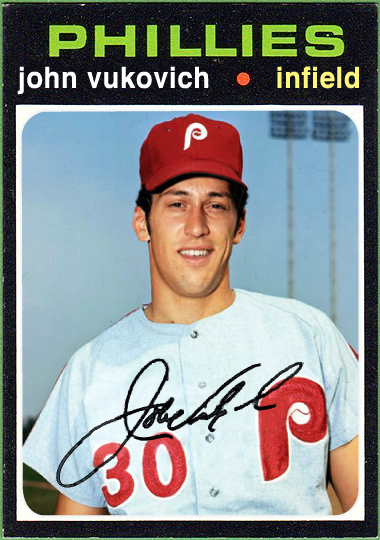 Vukovich appeared in three games as a 22-year-old, collecting one hit over eight at-bats with a run scored, good for a .125 batting average.
He’s see substantial action in 1971, appearing in 74 games and collecting 233 plate appearances, though hitting only .166 with 36 hits, 11 runs scored and 14 runs batted in.
Oddly, Topps felt all that action (and perhaps low average) was not enough to get him a card in the 1972 set, so I created one a few years back on the blog as well.
Granted, turns out he wouldn’t even play in the Majors during the 1972 season, but he will make it back in 1973, now as a member of the Milwaukee Brewers, before moving on to the Cincinnati Reds in 1975 and back to the Phillies for the final five seasons of his 10-year career.
All told he’d finish up with a .161 career average with 90 hits in 559 at-bats over parts of ten seasons, while playing all infield positions and playing for two World Champs (1975 Reds and 1980 Phillies), though he didn’t get into Post Season action himself.
He would also get two brief stints as manager, two games heading the Chicago Cubs in 1986 and nine games in 1988 with the Phillies.